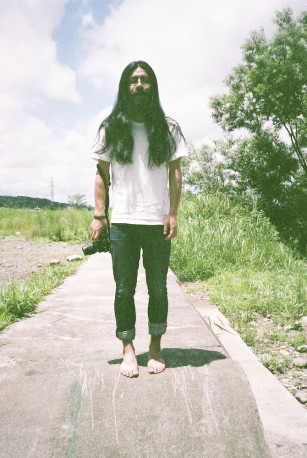 My gradmother was the big influence. When I was five, she bought me a personal karaoke tool and got me so much into Enka. Punk blowed me in middle school years. Maybe something weird started to happen inside me. Hardcore punk (UK/US) purified myself in high school and discouraged me from listening to songs longer than 2 minutes. I got an iPod for the first time then. It was 4GB, silver and iPod mini. It was when I started to dig vinyls.

When I graduate from high school, Jazz and Ethnic Music interested me instead. In college, Electric Music and Ambient Music broadened my horizons and had me realize that those one-hour songs are happy facts. Collecting vinyl records got to be serious for me around this time. They moved and impressed me by telling me how old music are new and also have good sound.

After graduated from college, I moved to Tokyo from Kobe and live until now like a vinyl zombie. Can’t stop looking at the rolling things…I’m floating nights in Tokyo to find them. The maximum records I bought in one day is 88 when a record store in Tokyo had a huge sale .

I’m devoting all my life to vinyl records and things related to them. I see you somewhere between record and laptop or digital and analog. Recently there are too many things I favor or want to do. Now I’m confused.

Took this photo somewhere at Tamagawa in Tokyo, June 2014. to be continued…

About page for Japanese